Is this place dead yet, I miss source

real tho have I missed lawyerman shitposts?

And here , I thought I was the only one that thought this. I think though that it’s just we all have gotten busy in our lives. Now instead of playing we actually have to rest for the next day. XD

I mean source was only ever good for shitposting, with most people in offtopic then after we all moved to nexus like a 3rd of shitposters just dissappeared along with half the commission artists. I still don’t know WHAT the fuck they were thinking with this disgusting ass forum format. I also miss cocacolax and calling dice a pedo

I agree, I suspect they are transitioned to either Reddit and even Discord. Those two mediums are responsible for most of the users moving on from Nexus. As far as the current format, Perhaps it was an attempt to copy , If you will , The same format of one of the mentioned programs?, Perhaps it is necessary to transition to discord altogether, At the very least - You don’t have to worry about paying website fees and maintenance.
However, if the person that is responsible for this website, should implement a new design that would appeal to the community.

If i remember correctly, there were complaints of some people within the community of Nexus initial design.
Eh, what can you do, either try to make some people happy some of the time, Or at least try to appeal to them most of the time, and you know what? Im getting some old vibes of when Yahoo messenger was all the rage,
Oh, and even IRC, and also ICQ. Then there was something new that made all that obsolete.

You don’t know what we were thinking because you’ve never bothered to find out.
It’s because no one was willing to work with the massive headache that was Xenforo and we felt we were short on time.
Every time any minor change was made to Nexus, something would break and be fixed 3 seconds later, and there’d be 5 threads minimum all across the forums complaining about it.

We wanted at least something to get some public archives of lost information up before the Google Caches started dying out. On top of that, constant questioning, complaints, rumors, misinformation. It was the most stress any of us has had to deal with in regards to this website, and for a problem that should not have even happened in the first place.

We already busted our asses using this piss-easy forum software trying to bring something back up for the userbase after things were deleted with zero backups. Using Xenforo again would’ve taken an extra month or so and people could hardly even stand to wait the week it actually took us. Shit, even a week was premature.

And what would we have gotten for that anyway? People to leave again or never come back in the first place? Discord and Reddit are already killing forums. Have been for years. Anyone who was around before the nuke knew that Nexus was already dying.

If you want a new forum, then make one. No one was ever stopping anyone from trying. It’s just no one one bothered.
And that’s the wiser move, really.

Alternatively, you can fix the layout of current Nexus for the staff, but I wouldn’t recommend wasting your time. It won’t bring anyone back, regardless of whatever it is they’ll tell you.

At the end of the day, Source, Nexus 1.0 and all it’s little admin changes, and Nexus 2.0 was and has always been a nightmare that no one wanted to deal with. Not Dom, not David, not Sach, not Crim, and I’m surprised Necro even still pays the bills seeing as he has bigger and better concerns with life.
It only held together past David’s adminship because a bunch of dedicated, but increasingly unqualified, retards like myself stuck to it.
Sach didn’t have to take the site, Crim didn’t need to take the site, but they did anyway.

It was fun while it lasted, as long as you were nothing more than a shitposter, but it’s over and it’s been over for years.

You’re right, I didn’t bother investigating into what really took place, Because Life happened, In the worst possible way. Eh. , Look fishy… Most of the time I was trying to recover myself, I literally have been DDOS’ed soo many times it’s not funny.
But, I’m not going into to detail about that, Yet - Here I am. I had no idea you actually considered me " a shitposter", eh… I guess the true colors always show when you’re pissed off.

Maybe I don’t know how much shit you all had to deal with , and maybe I do.
In times like these, perhaps its better to try and re-invent the original idea regardless of what others think., Cause if you sweat the small stuff, It’s gonna get you eventually.
Maybe, I never really expressed my appreciation of everything that has been done., I know , it’s lots of blood,sweat, and tears.

Was directed at OP, who I know from DFO Source as a Spam subforum shitposter along with the rest of the regs at the time, including myself. It’s not an insult, it’s literally most of the regulars did back then.
I’m sure you remember those times just as well as I do.

And it did affect me eventually, which is why I quit the staff less than a week after we brought Nexus back.

I’m sorry fishy. I hope you will recover. So what now?

Nothing.
There are no immediate plans for Nexus anymore that I’m aware of.

I’m surprised Necro even still pays the bills seeing as he has bigger and better concerns with life.

It’s pretty cheap when you’re not paying for licensing on the message platform.

Granted, Discourse’s UX was not what users were going to accept, and the attempt to make it more fitting was… pretty laughable all things considered. I should have probably just thrown the site up with default aspects and asked for help on CSS right then and there.

And what would we have gotten for that anyway? People to leave again or never come back in the first place? Discord and Reddit are already killing forums.

Discord is great as a chat service. Reddit is great as a news aggregator. I feel they’re pretty lacking in terms of a way to get discoverable, up-to-date, and in-depth information.

I was really hopeful that DFO Nexus 2.0 would be able to pivot to that niche. Looking back, I don’t really know why I expected that to work any better than DFO Core did when Puritas made a bid for that angle.

I’m pretty confident that, if there was a collection of pages for guides that:

If there was a proper tool for 1 and 2, I wouldn’t be surprised if a couple DFO power-users could keep a wonderful cache of information that could help drive enthusiasm for the aspects of play I enjoyed in the game.

Unfortunately, we don’t, so we have this horror show: 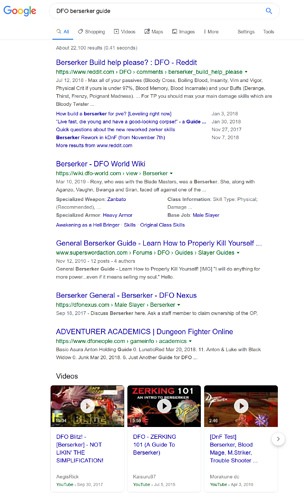 It gets even worse with other search styles. 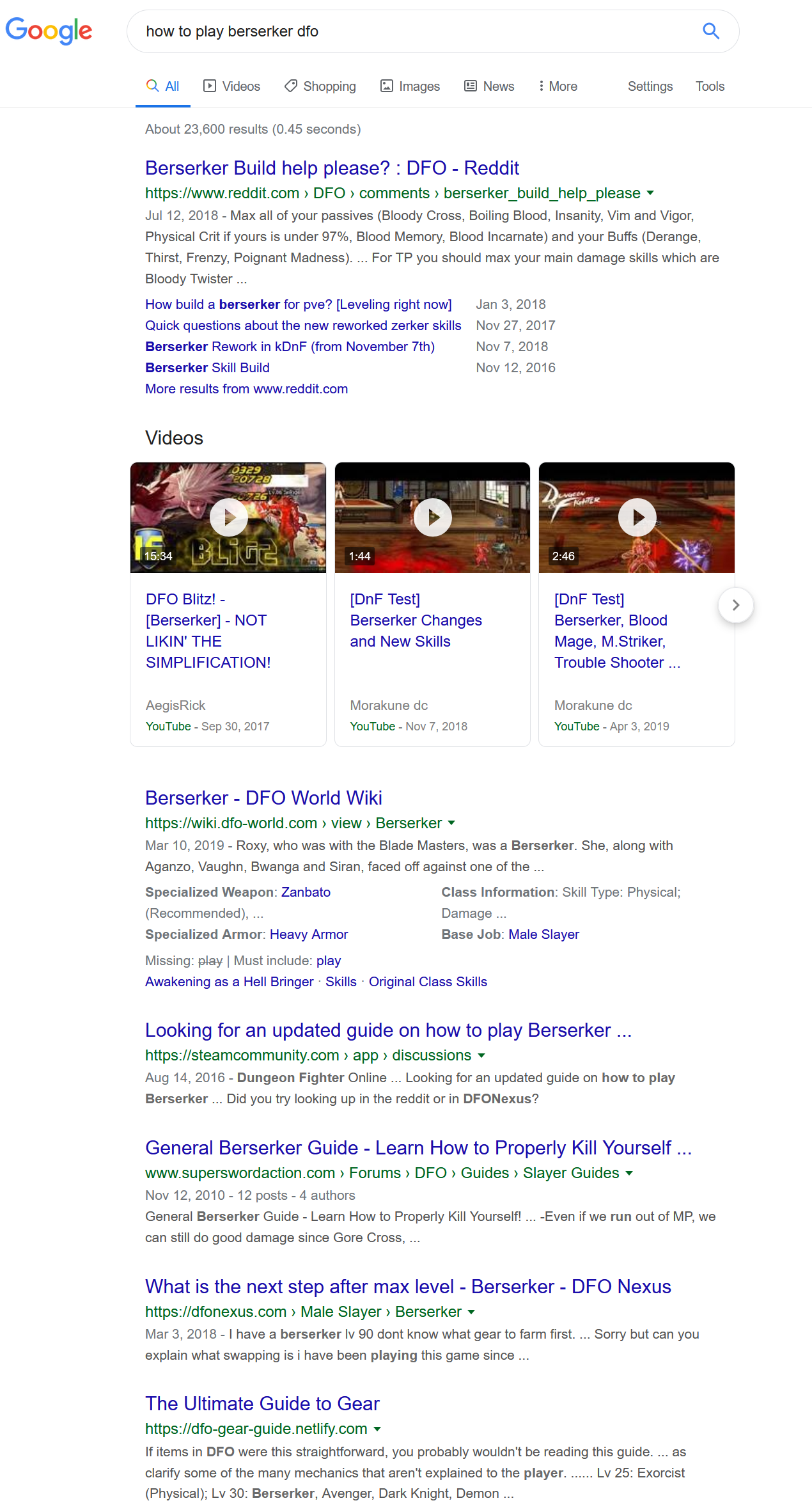 This still haunts me and I’m not even playing the game anymore. It’s a recurring pattern I see in all online games, and even aspects of my technical field and autodictation.

Ill admit, CSS is a completely Whole different animal , When it comes to Websites. Thankfully I have enough of a learning curve that I am able to get by, Just barely. I just wish there was more time to play, like it used be.
Obviously , there is a deep passion that still exists, and tremendous creative urges that need to be satisfied.

Fishy did mention , How utterly horrendous it is to design the forum software that is being used. I totally and
completely agree, However…I still wouldn’t mind If All of you’s that were involved in this project , Took you time and did things the way you wanted to. Regardless of everyone else who complain, complain, complain.
Fun fact Auxilium.CC is no longer a thing, That and they all transitioned to Discord Instead anyway.

I regret the sheer amount of time I dumped into what was 100% a thankless task. Sure, sometimes I miss the sense of community from playing a grindy f2p kmmo but in the end it was a bunch of volunteers. I sure wasn’t qualified to be running anything - I only had enthusiasm and a bunch of shitposts.

It has all been going downhill, from David onward, and honestly I think we should just let dead things rest. Besides the vague nostalgia (I still chat with some of the old crew) there’s not much value anymore.